4 Stocks Holding Up During The Market Correction

(This first appeared on SeeItMarket.com where I am a contributor)

The market correction has taken several stocks down with it. And, to be fair, it may still take down the last one’s standing.

That said, I’ve been looking at several stocks, both technicals and fundamentals, and I came up with a short list of stocks that have been showing strength during the current stock market correction.
Here are four stocks that are on my watch list and look intriguing (thus far) amidst a sea of selling.

Secondary indicators like the MACD and the ADX (w/+DI and -DI) are showing near-term bearish signals for JetBlue (JBLU). For the bulls, I believe that it likely means you’ll be able to buy on additional weakness to the $24.00 breakout level from earlier this month; and possibly to the 100-day simple moving average. 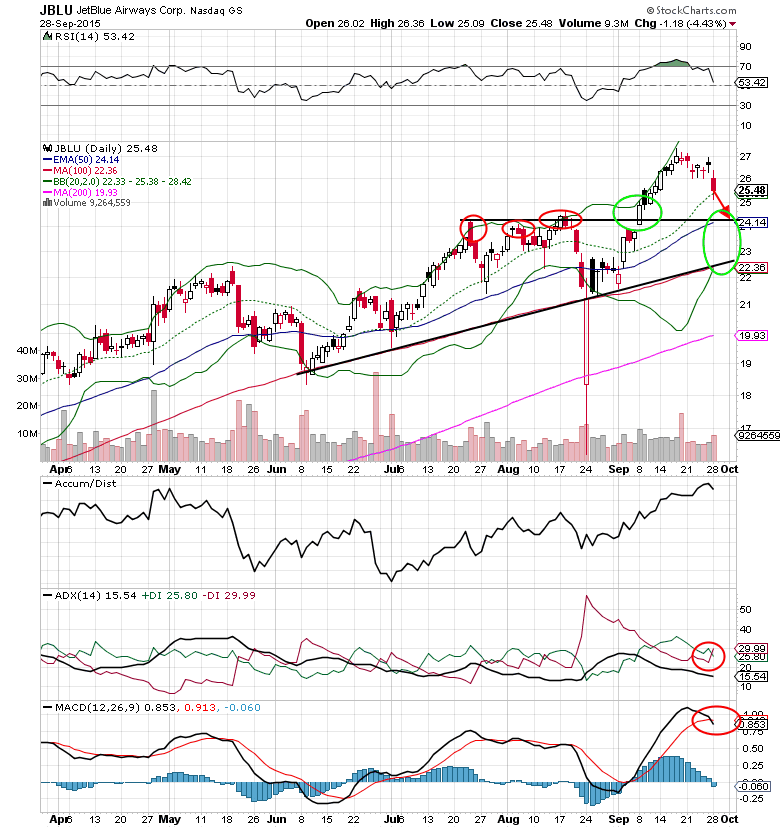 For about 7 months shares of Altria Group (MO) have been consolidating between the high $40’s and the mid $50’s, following a massive rally in 2014. The stock has weathered the market correction well, currently just a few percent below the all-time high. If Altria can close above the $56 resistance level it would setup for a continuation to $60+. One major catalyst that could trigger such a move in Atria’s shares would be a takeover of SABMiller (27% owned by MO) by Anheuser-Busch. 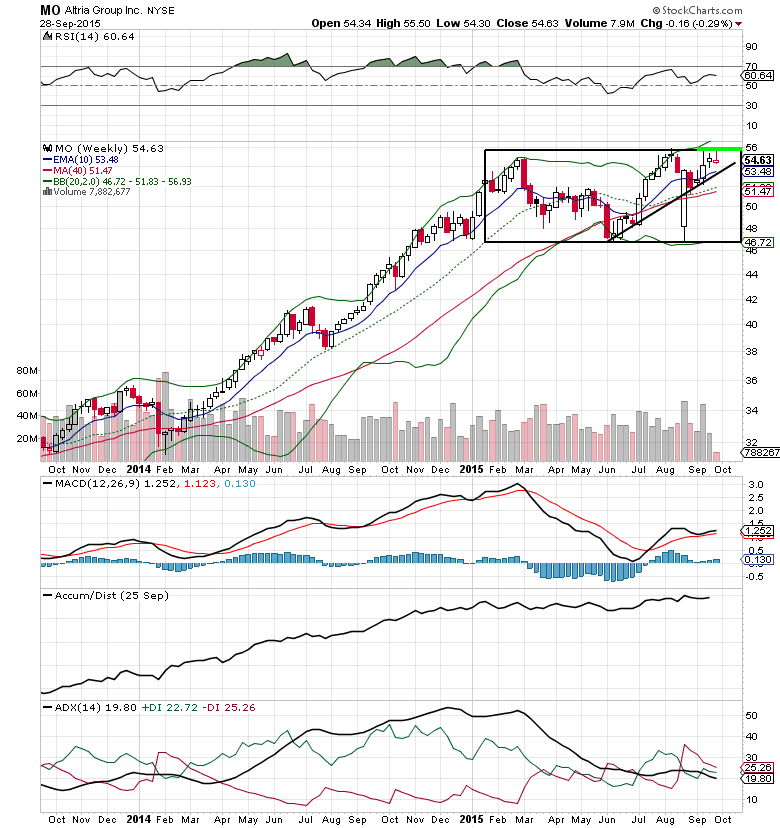 The 7-day losing streak in Expedia (EXPE) has resulted in a correction from the September highs near $131. However, this is not out of the ordinary for the long-term uptrend over the last couple of years. On recent pullbacks the buyers have stepped in around the middle Bollinger Band (20-week SMA). If that doesn’t then there is major support at the 40-week SMA (200-day SMA). Watch these levels for potential buy points. 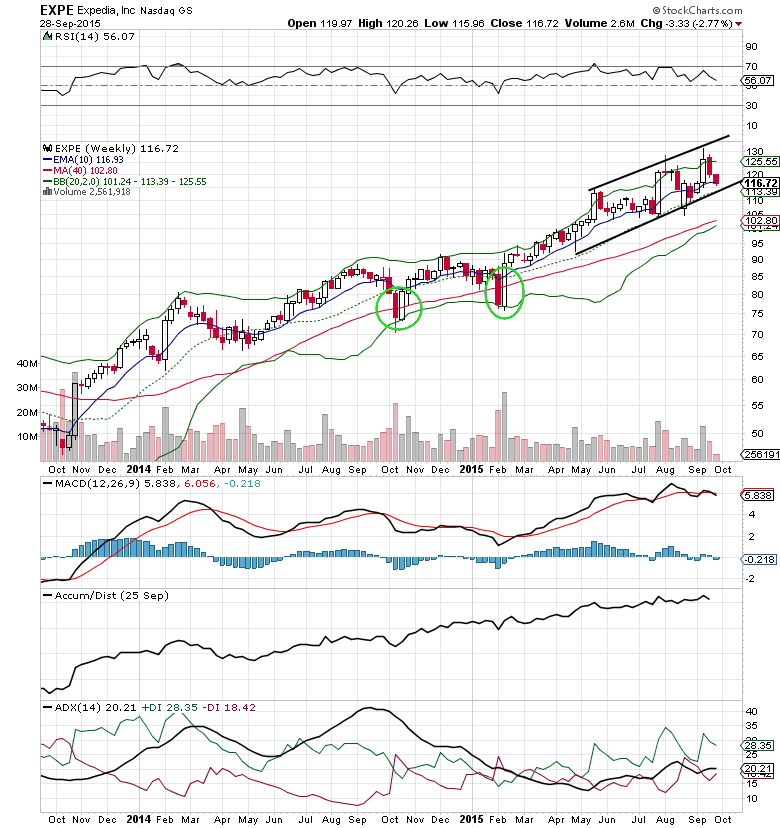 Back in May, shares of T-Mobile US (TMUS) broke out above the 2014 high at $35.50. Using the December low of $24.26, TMUS potentially sets up for a longer-term measured move to $46.76. Last week, Oppenheimer reiterated their outperform rating with a $48 price target as T-Mobile unveiled a $5 per month lease plan for the iPhone 6s. 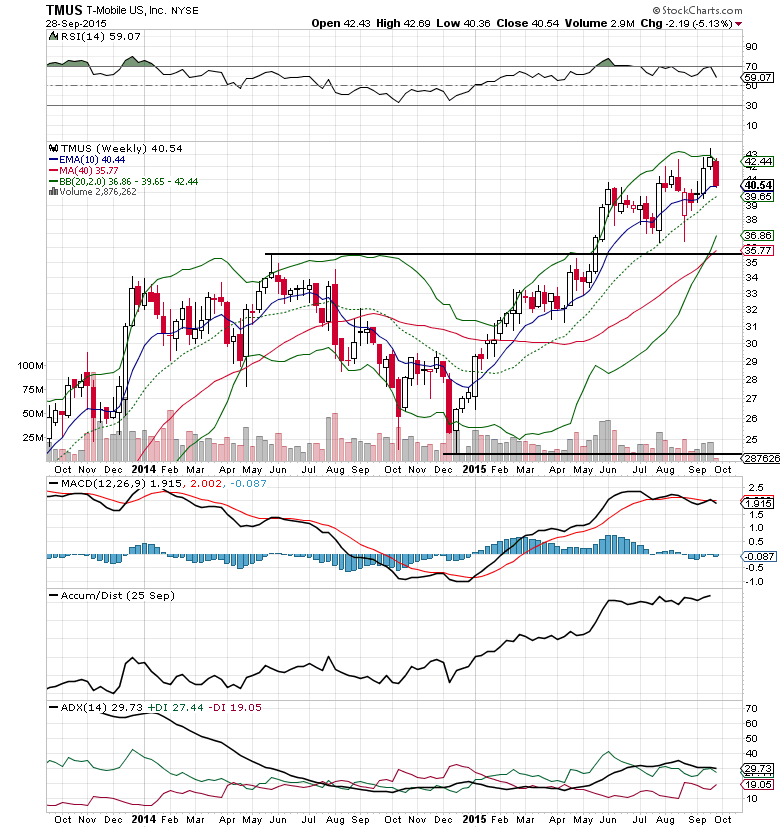 Thanks for reading and good luck out there.

No position in any of the securities mentioned at the time of publication. Any opinions expressed herein are solely those of the author, and do not in any way represent the views or opinions of any other person or entity.
Not Investment Advice – Please read investment disclaimer.