Traders Bet On More Downside In The Oil Drillers 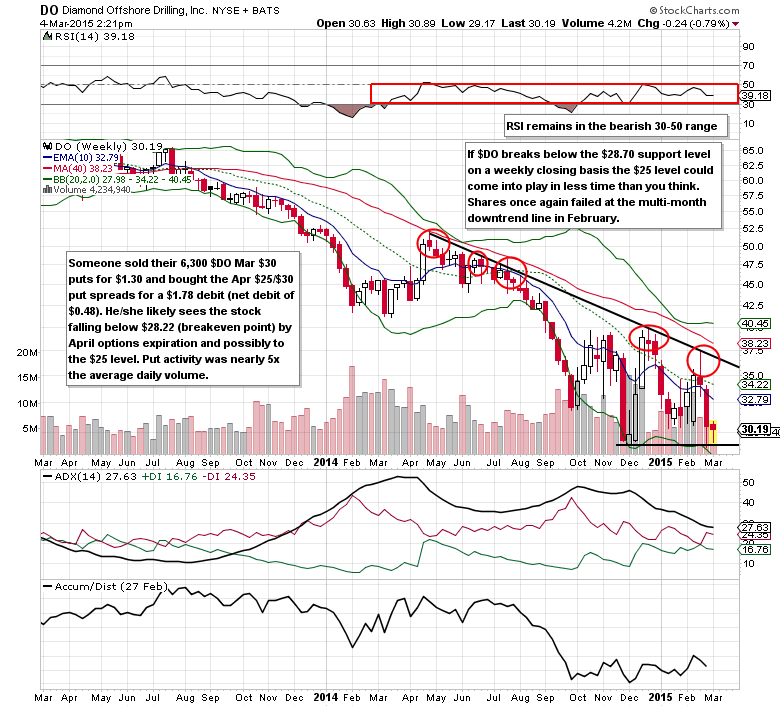 Notes: Long before the oil bear market began in the second half of 2014, Diamond Offshore Drilling (DO) had been struggling (see 2-year weekly chart above). The collapse in energy prices as you might have guessed hasn’t helped the $4B oil & gas driller headquartered in Texas. Earnings estimates for 2015 and 2016 continue to be slashed week after week ($3.12 per share to $2.13 per share for 2015 in just 3 months). This means shares trade at a not so cheap 14.18x (even higher when look at 2016 earnings under $1), price to sales ratio of 1.52x, and a price to book ratio of 0.93x. Revenue of almost $3B in 2014 is expected to shrink 8-9% annually for the next couple of years too on lower activity and a declining price for energy products. Yesterday, Evercore ISI downgraded the stock to sell from hold (10 sell ratings vs 4 buy ratings in the analyst community). Consider a similar bear put spread mentioned above if the stock does in fact take out the recent lows. 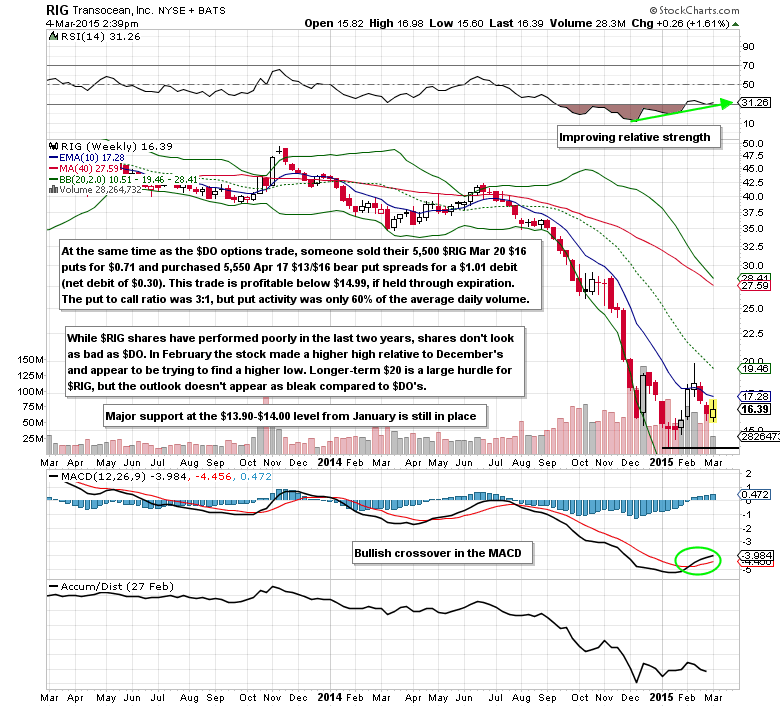 Notes: Transocean (RIG) is one of the largest offshore drillers around at a near $6B market capitalization, but they also continue to see lowered revisions to earnings and projected revenue declines in the coming year (trades at a P/E ratio of 9.27x 2015 estimates though). Last month, the CEO stepped down and they cut their dividend by 80%. On February 26th, (RIG) beat Q4 earnings estimates by $0.20 and topped revenue estimates by $140M (-1.5% YoY decline). It also doesn’t hurt when billionaire investor Carl Icahn is a major holder of your stock either. While Transocean could end falling in the coming months (like the option trader is positioning for), look for the stock to outperform its weaker competitor Diamond Offshore Drilling on improving technicals and on that a lot of bad news has already been baked into the stock price (CEO, dividend, etc).

New All-Time High In Dillard’s, But The Run Isn’t Over Just Yet (Options Risk Management)

1 On 1 Options Mentoring: Learn more about my 1 on 1 equity/options mentoring courses that help can you improve your trading odds and risk management skills (courses start as low as $55!).

More Of My Commentary/Articles: Check out my contributor content for TraderPlanet, Seeking Alpha, and TheStreet.com.